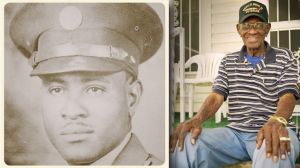 Here’s the rub (in the link above);  He met President Obama in 2013, at an event at Arlington National Cemetery, where the president singled out Overton during his remarks.

“When the war ended, Richard headed home to Texas to a nation bitterly divided by race,” Obama said at the time. “And his service on the battlefield was not always matched by the respect that he deserved at home. But this veteran held his head high. He carried on and lived his life with honor and dignity.”

Remember I blogged on Susan Rice’s speech at VE Day Ceremonies this year?  She said that “Platoons of white and black GIs fought side by side on the fields of Europe, and then black servicemen, like my late father’s Tuskegee airmen, came back here to demand justice in their own land.”

Will the Obama people EVER give it a REST?  Can we not celebrate anybody without getting the sad story attached?   By the way, how’s Obama know he ‘held his head high’ or anything else about Mr. Overton?  Was he there?

Maybe it’s just ME and I didn’t know that Black Americans coming back from their hard work fighting for our country did want to demand justice and “didn’t get the respect that he deserved at home” but how does Obama know that about Richard Overton?  I hope it’s not true;  I wouldn’t want our soldiers treated badly!  Who would? So, if that’s the case, and if Mr. Overton wants to discuss that, let him.  He should!  But Obama?   It’s like he’s so thin skinned he can’t stand to let a split second of a chance escape him if he can talk about the RACISM OF AMERICANS.  You can tell by reading about Mr. Overton that he’s not a guy who’s whining and complaining;  heck, his great attitude’s probably part of what’s kept him alive at 109!…he’s wonderful!

This constant racist stuff is agenda-driven and is very disheartening.  America deserves much better.

This entry was posted in America, Obama, racism, war. Bookmark the permalink.