Inside Comey’s Brain……..AND that of GINGRICH! SCROLL DOWN! 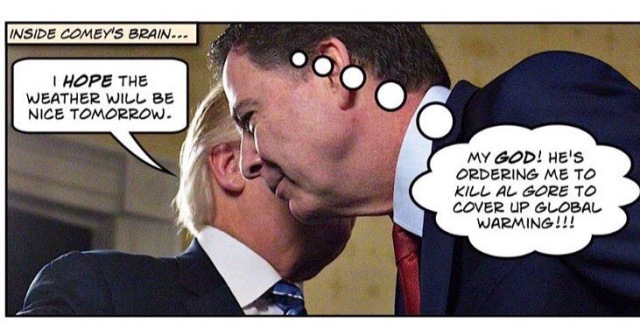 Comey admitted he leaked the information as part of the FBI’s probe into Russia’s involvement in U.S. elections and the connections of the president’s former national security adviser Michael Flynn with Russian officials.

“I asked a friend of mine to share the content of the memo with a reporter – didn’t do it myself for a variety of reasons – but I asked him to, because I thought that might prompt the appointment of a special counsel,” Comey testified before the Senate Intelligence Committee.

Gingrich called this “the most startling revelation” from the day’s testimony, as it was a “barefaced admission” of his intent to leak the documents in hopes a special counsel would be appointed to investigate the charges.

“This statement is tremendously important because it completely delegitimizes Robert Mueller’s so-called independent investigation and reveals it as poisoned fruit,” Gingrich wrote in his weekly newsletter on Friday.

Gingrich also pointed out that Comey and Mueller, also a former FBI chief, were “very close” and that    97 % of donations from Department of Justice employees who contributed to the 2016 presidential election were in support of former Sec. of State Hillary Clinton.

“So, what we have here is a fired FBI director, who leaked private material to the press, so he could get his friend appointed as a special counsel in order to take retribution on the President – with the aid of a department full of federal lawyers who would have rather seen Hillary in the White House. And we are supposed to believe this will be an objective, unbiased investigation?” Gingrich wrote.

Gingrich said Comey represented the deep state “permanent opposition” to the president, who would stop at nothing to “keep their influence” and harm Trump’s presidency.

This entry was posted in Intelligence Agencies, Justice Department, Trump. Bookmark the permalink.

63 Responses to Inside Comey’s Brain……..AND that of GINGRICH! SCROLL DOWN!