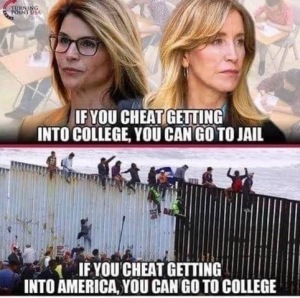 The new mood in America, thanks to Biden, is we need to give illegals everything we can.

That, apparently, is the way to keep people out.  Go figure!   OR we can send them money, as discussed!, and then we must believe they won’t use that money to hire coyotes to take them or their children into America….and rape and/or murder them, of course.

CAN THIS STOP WITH BIDEN IN CONTROL?  He’s already making finishing the wall HIS idea!

And what do YOU think the VP nightmare will be talking about to Mexico and Guatemala’s presidents when she goes down?    Mexico, whose president disdainfully refers to Biden as the MIGRANT PRESIDENT and Guatemala, whose president says you can’t advertise going to America then bitch about it when they do.   By the way, I find it totally fascinating that she will not be meeting with the President of El Salvador, who REALLY slammed Biden recently in a TV interview with Tucker!   I doubt if her not meeting with him is just a coincidence!