Biden in Scranton cracked me UP!….

…well, he ‘cracked me up’ but, on the other hand, that bumbling idiot is our president…YIKES!

Yes, I had THE FIVE yesterday,  as I usually do in the afternoon, and they had to cut to Biden’s ‘speech’.…I sat there, dumbfounded, wondering “WHAT is he trying to say?  Who cares about his grandfather and mother and where he lived and what they did and wisdom from his MOTHER..?  He just rambled and rambled off teleprompter!  It was unreal!

When they cut back to DANA PERINO on THE FIVE, I almost choked laughing when she opened with “Well….we just had a walk down Memory Lane!”  SO FUNNY.  And SO TRUE.  And WHO CARED?        It was unbelievable.   But at least, when he’s not reading the teleprompter, he’s not squinting so hard I can barely look at the man.

ONE THING BIDEN SAYS FREQUENTLY, and he mentioned it against yesterday, is “The rich didn’t build this country…the union workers did!”

OBAMA is famous for having said YOU didn’t build that!…..remember?

WHEN BIDEN SAYS THIS I start wondering if he REALLY believes union members and others…plumbers, carpenters, electricians, etc etc etc BUILT AMERICA without any help.

“The rich didn’t build this country” he insists.   SO here’s my thought about Biden and Obama’s ridiculous lines:   IF A SUCCESSFUL ARCHITECT HADN’T DRAWN THE PLANS FOR THAT BUILDING, COULD THE ELECTRICIAN AND PLUMBER AND DRY WALL GUY JUST GONE IN AND DONE IT ON THEIR OWN?   WHO’D HAVE PLANNED IT?

COULD A BUILDING GO UP WITHOUT THE FUNDING FOR PLUMBING, ELECTRICAL NECESSITIES, DRY WALL, FLOORING, HVAC.,..etc etc etc?

OF COURSE NOT.……. WHAT is it about the LEFT that can’t acknowledge THE RICH DID BUILD THIS COUNTRY…WITHOUT THEM, THE WORKERS COULD HAVE DONE ZIP…THE RICH FINANCED THE COUNTRY, PLANNED THE COUNTRY, RAN THE COUNTRY!   DID AFRICANS COME HERE AND GET MADE CEO’S OR PRESIDENTS OF BANKS AS SOON AS THEY LOOSED THE SHACKLES BLACK MEN HAD PUT THEM IN FOR THE JOURNEY HERE?  NO, BECAUSE THEY HAD NO EDUCATION AT THAT TIME, THEY COULDN’T EVEN READ!    COULD UNION MEMBERS SUPPORT THEIR FAMILIES IF THE RICH CORPORATIONS DON’T HIRE THEM?  OF COURSE NOT! 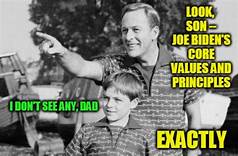 7 Responses to Biden in Scranton cracked me UP!….